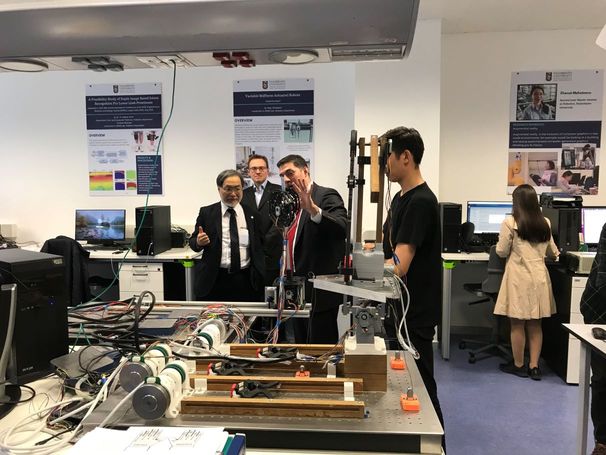 One of the founding fathers of intelligent systems Prof. Toshio Fukuda visited Nazarbayev University between 14 and 16 April 2019 as a guest of ARMS Lab Director Dr. Atakan Varol. Prof. Fukuda is the IEEE President-Elect 2019 and will begin serving as the IEEE President starting 1 January 2020. IEEE is the world’s largest association of technical professionals with more than 423,000 members in over 160 countries around the world.

As part of his visit, Prof. Fukuda gave an inspiring lecture entitled “Multiscale Robotics” at the Orange Hall of C2 building to the university academic staff and more than three hundred students. Additionally, he participated in a number of meetings with the School of Science and Technology faculty and researchers, where various academic, research and administrative topics were discussed in-depth. During his tour of the robotics laboratories in C4 building, he was introduced to the research projects currently carried out.

Dr. Varol commented: “It was an honor for us to host Prof. Fukuda, a living legend of robotics, at Nazarbayev University. We congratulate Prof. Fukuda as the first Asian President of IEEE. His visit indicates the expanding recognition of Nazarbayev University in the world robotics sph. He certainly is as a great role model for our faculty members and students.”