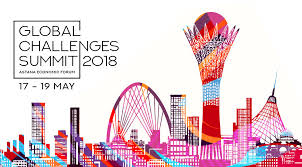 In the opening plenary session, President Nazarbayev spoke about the effects of digitalization not only on business but people’s lives. He highlighted the Digital Kazakhstan program spearheading Kazakhstan's effort in this area. Experts discussed emerging trends of the globe including economic growth and resource resilience, digitalization and urbanization, longevity and the financial revolution, global security, and cultural change.

Dr. Atakan Varol participated as a featured speaker in the sessions "Robotization as a Social Challenge and an Opportunity" and "Creativity vs Unemployment: What Will Humans Do in the World of the Machines?". These sessions of the Singularity track were moderated by Mike Butcher from TechCrunch. Dr. Varol debated the social effects of robotization and artificial intelligence with a prominent group of speakers including Michio Kaku, Andrew McAfee, Oleg Novachuck, Devin Fidler and Albert Efimov. The general opinion of the experts was that high-skilled intellectual workers in robotics, machine learning, and data science fields will have good job prospects. On the other hands, manual and repetitive jobs will disappear in the coming decades.